I Got a Letter This Morning!

Everyone LOVES getting mail and that includes kids. That’s why when I saw this adorable mailbox at the dollar store, I had to get it. I immediately was reminded of a favorite American Folksong called “I Got a Letter”.

Check out the video below and find out how the activity works!

Now for the details…

Mailbox: I got my holiday mailbox at the dollar store. But, you can use any sort of mailbox or box for that matter to pass around the circle.

Song Track: This song can be sung acapella or with a recording.  To access the recording by Matt Kalin, click here.  Then just find the song, “I Got a Letter” in the list of tracks.  The cost for the song is .99 and you can by it right there through itunes.

A capella: If you want to go with the a capella version, the words can be found below. Or, click here to see the notation at “Beth’s Notes” blog if you need help remembering the tune.

Movement Cards: I found the movement cards at the blog “Oopsey Daisy”.  Just click here to go to her website. Then scroll down and you will see the cards that look like the ones below. Print, cut and laminate and you can use them for years to come! 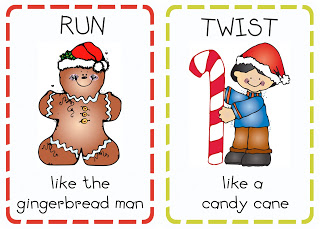 10 Songs Every Preschool Teacher Should Know

No matter if you’ve taught preschool for two weeks or twenty years, having a repertoire of classic children’s songs you can pull from at a moment’s is a must!

Problem is, we get stuck in ruts singing songs like “Wheels on the Bus” and “Twinkle, Twinkle Little Star” EVERY SINGLE DAY. Why? Because it is easier and more comfortable than going out and finding more songs to add to your repertoire.

But, what about all of those other “just as engaging” and entertaining songs out there you’ve yet to teach them? There are so many amazing ones waiting patiently to be discovered. So, I’ve compiled a list of 10 Songs Every Preschool Teacher Should Know as a way to get you out of the rut. Most likely, you will know most of them and can easily work them into your repertoire pretty darn quickly.

What are we waiting for? Let’s get started! 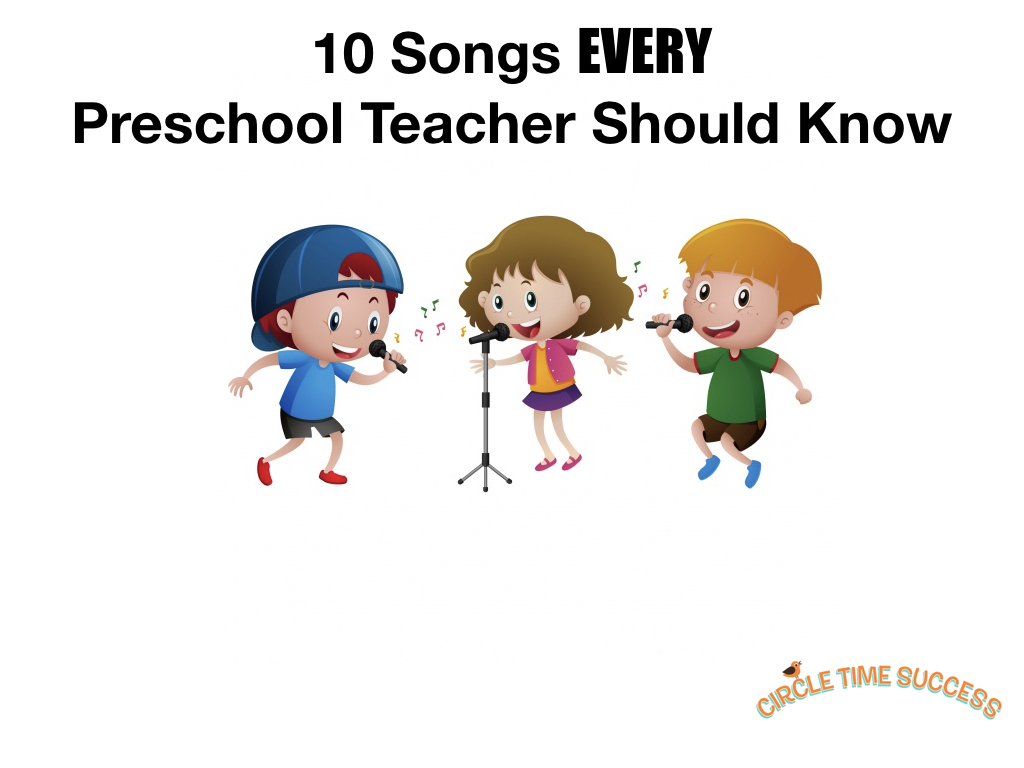 1. My Bonnie Lies Over the Ocean

This classic song is super handy because it can be sung with a ton of energy – a perfect way to get the wiggles out. Or as a lullaby to put them to sleep or calm them down after too much movement.

For the calming approach, have children pretend to rock in their boat as they move their bodies back and fourth to the beat of the song. The slower you sing the song, the calmer kids will become. By rocking back and fourth, not only will you be keeping them physically engaged, they will also be able to feel the beat of the song in their body as they sing the words. This two-pronged approach is key to making learning stick.

For older children, add some serious movement by having everyone sit down or stand up on every word that starts with the sound “B”

Can’t remember the tune? No worries! Check out the video below courtesy of Hooplakidz.

2. She’ll Be Comin’ Round the Mountain

I remember singing this song on many cars rides.  It’s a great way to build memory because it is a cumulative song. A cumulative song is when a part of the prior verse is added to the next verse making the song longer and longer each time.  This is great for our brains because it builds working memory, a key cognitive function children need to succeed both in academics and life.  Click here to learn more about working memory and the brain.

For a literary connection, check out “She’ll Be Comin’ Round the Mountain” by Jonathan Emmett.  The illustrations and slight twist on the lyrics makes for a fun sing/readalong.

Watch the video below if you can’t remember the tune from Huggy Bobo.

3. I’ve Been Workin’ on the Railroad

Not only is this just a fun song, it works great as a piggy back song. You know, when you change the words to a song but keep the tune? It’s a great way to get kids to listen to your words because it catches them off guard as they tend to tune out spoken words more easily.

Oh yes, back to the song. Play with tempo on this tune once the kids learn it. Start slowly and get faster throughout the song.  It adds a little sumtin’ to it and keeps the kids engaged. If you have a set of railroad spikes (I found them at an antique shop), try keeping the beat with them as you sing the song. Be sure to pass them around so everyone gets a chance to say they’ve held railroad spikes.

Check out the video for the tune courtesy of Muffin Songs.

4. If You’re Happy and You Know It

It’s hard to be sad singing this song. The verses to it are endless which makes it a great one for those moments when you don’t know how long you have to wait in line to be dismissed out to recess or lunch.

I discovered this little gem one summer when I was putting together a campfire sing-a-long. It’s hilarious, action packed and sorry, but it will mostly likely make its appearance around 2:00 a.m. It’s one of those songs.  Be sure to watch the video below to hear the tune and see the actions. I think it’s the best one out there.

Check out the hilarious video below from Brian and Pete

It’s said that we know the most about dinosaurs when you are four years old, you have a degree in paleontology or when you have a 4 year old. So true!

This gem of a song is from a Seattle songwriter named Nancy Stewart. For those who live in the Northwest, you just might know her.  She writes amazing songs that kids love! This song is a great example of her brilliance. Check out the song and her super awesome site by clicking here. Or watch the video below courtesy of King County Library Systems.

A classic song that’s easy to sing and super interactive. Sounds like the makings of a keeper I’d say! I love “Head, Shoulders, Knees and Toes” because it forces even the teacher to be totally engaged. I know this because if I don’t focus on what I am singing, I won’t point to the right body part! That gets pretty funny for kids.

For a change up, after singing the song through once, take the word “head” out and think it instead of saying it. Then each time you sing the song again take at the next body part in addition to the last one and so on.  This is a great way for children to practice inner hearing – the skill of hearing words, melodies, and sounds inside our heads without those sounds being externally present. “Inner Hearing” is important for children to be exposed to as they will need to call upon this skill when they are reading to themselves.  Why not start teaching it now?!? Learn more about inner hearing by clicking here.

Ready for the tune? Watch the video below courtesy of Kids TV.

A camp favorite, this catchy tune is perfect for preschoolers who often spend time trying to impress their parents. Unfortunately, it doesn’t always end up being something parents are impressed by. Oh well, at least they are trying.

Check out the video below for the tune courtesy of the Kiboomers.

If you are uncomfortable being silly with little kids, you might be in the wrong business. Kids love silly and this song needs you to bring a lot of it. I start by telling the kids that I have put a piece of bubblegum in all of their pockets. I won’t tell you any more. Just check out the video below. This one is courtesy of your’s truly.

You made it to the end and your prize is a really fun goodbye song! I know because I have been singing this song for over a decade. Kids and teachers remember me for this song.  You can even sing it as an echo song if you wish. It is a great way for children to work on call and response as well as language.

I couldn’t find a video for this song that uses the same tune I do, so instead, click here for the audio version by me!

A Little About Me

Jocelyn received her BA from the University of Montana in Music Education and her MA in Music Education from the University of Washington in 2005. She is a certified K-12 music educator in Washington state as well as a Washington S.T.A.R.S. trainer. After moving to Washington State, she taught elementary general music for four years. While Jocelyn greatly enjoyed her time in the elementary setting, she felt children needed to have their “inner musician” awakened sooner than Kindergarten. In the Fall of 2003, Jocelyn started Musically Minded, Inc., with the hope of reaching the very youngest. Jocelyn takes an active role as both teacher and trainer. Being involved in this way allows her to stay aware of the changing needs of today’s children. Jocelyn has written a circle time curriculum, Circle Time Success, that not only shows teachers how to engage children through music and movement, but how to keep circle times fresh, fun and full of learning. The curriculum is currently taught in childcare centers throughout the the country. Jocelyn and her husband, Eric, live in Maple Valley with their budding musicians, Maciella and Natia.